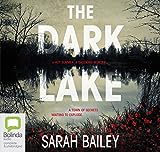 When Gemma Woodstock, homicide investigator in the large rural town of Smithson, views the body of her old school friend Rosalind splayed open on the autopsy table, she suffers the same feeling of inscrutability that has coloured her relationship with Rose for so long. Gemma, however, is hiding her own secrets. She has a four-year-old son, Ben, and has recently moved in with the boy's father, Scott. But the relationship is troubled and she is having an affair with a colleague that she works closely with, Felix, who is married with two teenage daughters. She knows that Rosalind recently moved back to Smithson to teach drama at their old school, but Gemma had not made contact and now she wonders why the incendiary Rose really came back to this country town. Rose lived alone in a small run-down apartment, even though her father is one of the town's richest men.